It’s been a busy week but I really wanted to make Pixie a new summer dress because she’s grown, yay! And now although she’s not quite a three year olds width she’s at least that tall.  Which makes getting patterns to fit much easier.

I used the same basic pattern as Alice’s dress last week but styled differently as the last thing Pixie needs is yards of billowing skirts.  It’s the same top so in addition to gathers I used bias tape to keep the arm’s neat and comfortable.  Must remember to order some more as well as some more elastic.

I chose not to use Serge this time as I’d already cut the fabric using pinking shears (no that’s a real name check it out) and overlocking seemed overkill.  The “pinking” stops the fabric fraying and meant I didn’t need to French seam either.  The dress is poly cotton in purple and pink with a small flower pattern. 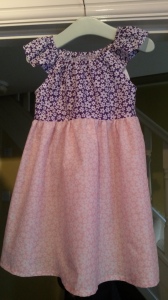 Because the Pixie is extremely slim I actually put the waist ties in on this dress.  It’s quite a simple addition but allows her to get in and out of it and then it still looks like it was made for her.  So here she is posing in the early morning sun.  Have a good weekend 😉